In 1871, an association for a free reading-room and library was formed, opening in Pashal Allen’s store on the northeast corner of Main and Market Streets. By 1877, the corporate name became the Warren Public Library and it raised funds and received enough bequests to build a new library in 1888. The widow of George Hail, a Warren native who made a fortune in the Eagle Screw Company later the American Screw Company, of Providence, was the chief benefactor with major donations from John Davol and John O. Waterman.

The George Hail Free Library was designed by the Providence architectural firm of William Walker & Sons in the Romanesque Revival made popular throughout America by Boston architect Henry Hobson Richardson. This magnificent building is made of granite and was completed in 1888. 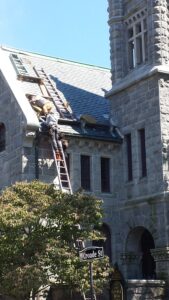 WHF has awarded the George Hail Free Library matching grants to support the multi-year project for the repair of the slate roof.